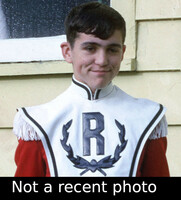 Where's the worst air in the U.S. today?

Where's the worst air?  Oh.  Right here.  In the little known State of Utah.  Also known, perhaps,  as the State of Denial.

This time of year brings temperature inversions to the valleys along the Wasatch Front Mountains of Utah, and pollutants from 1.7 million cars is trapped - it just cannot be dispersed to the surrounding desert!   This week cities in Utah have repetitively made the EPA's chart of Top 5 Worst air in the United States.

Here's today's current conditions and forecast  (this just shows the top 5 in the nation): 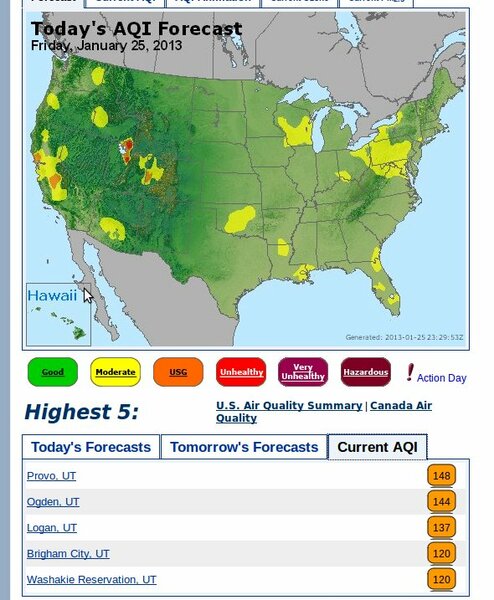 Is this unusual?  No.  It's January in Utah!

Earlier this week, a group of health care professionals delivered a letter to the Governor of Utah, requesting that the Governor take immediate action and declare a healthcare emergency.  The doctors stated, "We know from thousands of medical studies that people are dying in our community right now because of air pollution and its role in triggering strokes, heart attacks, congestive heart failure and infant mortality."  Reference:  kuer.org

"Ally Isom is a spokeswoman for Governor Herbert. She says he would not characterize current air quality conditions as a health emergency, but acknowledges it is unhealthy for some groups. She says the governor encourages everyone to exercise individual responsibility to combat the pollution."

The Governor does seem to be the Governor of the State of Denial.  "Unhealthy for some groups" is quite the understatement.  The red designation in the graphic above is an EPA Air Quality Index greater than 150.  The EPA defines this category as, "Everyone may begin to experience health effects; members of sensitive groups may experience more serious health effects."   This is a marked contrast in definition.  Maybe the good doctors are right and the Governor is wrong.

I take exception to the Governor's solution. He "encourages everyone to exercise individual responsibility to combat the pollution."  It wasn't the individuals who built the twelve lane freeways along the Wasatch Front, enabling a lifestyle which is reliant on cars.  It was the elected government.  It's time for the government to take action.  As the doctors say, this stuff isn't just an irritant.  It's costing lives.

Earlier today, I sent my proposals to my State Representatives.   They are harsh, but would be effective.   The "individual responsibility"  approach has not worked.   We need real plans now.   Here's my proposals:

It is time! It is time to stop wringing our hands about our filthy air. IT IS TIME TO TAKE ACTION! This week we have been ranked number one in the nation for filthy air by the EPA. Cars are the major problem. Lets attack it there on an economic basis!

Proposal 1: During periods where PM 2.5 emissions are above 30 ppm, charge a $10 toll for every vehicle entering I-15 in affected counties which have fewer than 2 passengers. Hmmm that's logistically challenging. Probably would be troublesome to implement.

Proposal 2: During months where PM 2.5 emissions are above 30 ppm, increase the gas tax in affected counties. I'd say $3.00 a gallon would get enough cars off the road.

Why am I concerned? Well, I'm sick. Not terribly sick, just sick when I breathe the air. I dread January each year. If it were more than 6 weeks a year, I'd move! I'd leave the state. I'd leave the state? Hmmm. Maybe this pollution has a negative economic value to the state! Yesterday more than 100 medical professionals petitioned the Governor's office, asking for a declaration of "healthcare emergency". The governor's response was lame. He said, "Nah, it's not that bad".

Big problems require bold solutions. We have a big problem.